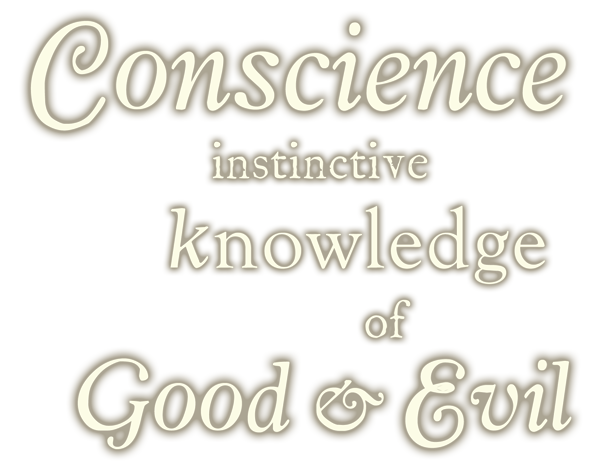 “You coward…you liar…you thief,” a voice within you screams. Loud at first, but as the years go by its voice becomes fainter and fainter…
But the conscience never forgets – never.

Remember the first time you stole or lied to cover up something you did? Why did you fear telling the truth about it when you were questioned? The shame you felt and that sense of guilt within you – where did it come from? What made you know that what you did or did not do was right or wrong?
Every single person born has this innate knowledge automatically within them; a clear standard by which you can judge yourself. You have not been taught these things you know, yet still somehow “you know.” It is called: the conscience. The conscience is the most sensitive aspect within human nature. It is the instinctive knowledge of right and wrong.1Genesis 2:9,16; Genesis 3:22; Romans 2:14-16

Like a candle, its light shines
to expose the darkness.

It keeps a perfect record of every thought and every deed you ever committed.2“the dead were judged by what was written in the books, according to what they had done.” ~Revelation 20:12; “For God will bring every deed into judgment, with every secret thing, whether good or evil.” ~Ecclesiastes 12:14 Like a witness in the courtroom, it testifies to that which is most hidden in the chambers of the soul. It urges us to obey what we know is true and turn away from what we know is evil.3Genesis 4:6
The conscience is the inner voice of God within each person.4Romans 1:19 It is the self-reflecting, judicial power in mankind by which God can call every man or woman to account. If we are absolutely honest with ourselves, our conscience will let us know what we are really like, passing perfect judgement on our state before God.
The word con-science means: “To know with or have knowledge.” It is that hidden part of the human soul which most reflects (like a mirror) the likeness of the Creator.5Genesis 1:26; 2:22; 3:22 It is the “common denominator” in all human beings that bind us together as a unique creation and distinguishes us apart from all the rest of creation. It causes us to hold something in common with each other despite all the many varied differences.6Romans 2:9-12 It also acts as the moral judge within people’s hearts.

The conscience is based on knowledge and
functions off the highest standard it knows
How much worse the world would be if it were not for the human conscience. To reject conscience is to reject God, for the conscience speaks on God’s behalf to lead and to guide man in the way he should or should not go. It is a rewarder of those who listen to it. It also warns a person about the consequences they face when they commit offenses against it.7Romans 6:23, 1:32 Since it represents God and acts on His behalf in this way, it could be seen as a “Vice Regent.”

Conscience: The Vice Regent of God

A Vice-Regent is one who rules in the absence of a sovereign (king.) Acting as a Vice Regent, the conscience exercises its authority by summons, calling a person to account, as in a court of law. It calls the court in Gods’ name and acts for Him in passing judgement. As a witness is called upon to give evidence, so our conscience either speaks on our behalf (defends) or condemns (accuses) us for our guilt.8Romans 2:15 If our conscience condemns us, then God condemns us, for God is greater than even our conscience – knowing all things. On the other hand, if our conscience acquits us, then God also acquits us.91 John 3:20 Knowing He accepts us, gives us the inner confidence to embrace suffering or pain when necessary in doing what we know is right.101 John 3:18-19 The conscience also communicates to our own heart that an eternal reward is awaiting us for persistence in doing what is good – our struggle is not in vain.11Job 14:14; Romans 2:6-7
Because a person’s heart is revealed by their actions, people will be judged by their deeds: whether they obeyed or disregarded their conscience.12Revelation 20:11-13 Disobeying this inner voice of conscience is serious, because there are eternal consequences for doing so, just as there are repercussions in this life for our actions. It is a true saying that “as a man sows, so shall he reap.” Why then do we not use our better judgement to judge the evil that we have done and turn and do the good we know to be true?