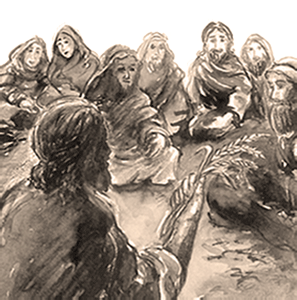 They followed him around from town to town, everywhere he would go. They loved him, or at least they thought they did. One thing for sure, they couldn’t live without him.

They were the inner circle: a dozen or so men, a handful of women. But they weren’t the strong, the self-reliant, the shrewd power seekers jockeying for position. No, they were poor. They had been kicked around. They needed a friend, someone they could trust, someone who would always tell them the truth.

That’s why they — the inner circle — needed him. He had life. He was full to the brim with joy. He didn’t just party for a while and burn out. His joy went on and on and on and on … It was obvious that he loved them. Yes, them! The misfits, the ragamuffins, people who everybody else was ashamed of, people who were ashamed of themselves. He gathered them around and talked to them, filled them full of vision, and made them feel like they were somebody. He wouldn’t just talk about the good times. He made the good times happen. He even made the hard times good.

And they would sing. Even when they were so down they didn’t know which way was up, they’d sing. He’d make them sing! He wouldn’t let them get into themselves and go under. He was really a friend.

But one thing would get him down. Well, not down, really, but sometimes he would just cry. When he saw all the people scattered and divided, and hurting, and afraid — he’d cry.

But he would cry because the system had got them so programmed and so leveled out that they wouldn’t stay. They’d always go back to the same dead old life, working their job, taking care of their own space, but so cut off from one another and so helpless.

He wanted a fire to break out on the earth. A fire that would burn in the people’s hearts and burn out their greed and selfishness and dullness — a pure, white-hot love for one another. And he was one hundred percent devoted to it happening. So even when he cried, he didn’t get hopeless. He wouldn’t give up. He knew it would happen.

But then the system started to close in on him. They wanted to smash him. Even one of the inner circle betrayed him, told them right where to find him and when to take him. And the rest of his “close friends,” when the heat was on, took off running. Nobody stood with him. All of a sudden, they split, trying to save their own necks. Some friends.

But that’s not how he saw it. He didn’t even get bitter. He knew them. He knew all about them. He even knew they were going to desert him. It didn’t matter. He forgave them. Can you believe it? He forgave them! He loved them to the end.

Oh, the system crushed him, all right. All the evil in the human heart was focused on him that day. They killed him. But they couldn’t kill his spirit.
And before they knew it, his body wasn’t dead anymore, either. That spirit of love that he possessed overcame death. Love is stronger than death. He came back from the dead to tell his friends that he forgave them. They hadn’t been true friends before, but he made them friends. His forgiveness made them loyal to him forever.

We know this man. His love has won us, too. We are followers of this man, Yahshua,* just like the inner circle was back in the beginning. We need his life. We want to see all his little ones brought home. We don’t care what it costs. We don’t have anything better to do. We want the Twelve Tribes to be gathered. We want love to fill the earth. We know it’s going to happen!

He is still looking for just the right ones to fill up his inner circle.