Unlike animals, we are accountable for what we do, because we have an ability to reason and a freedom to act far beyond them. Consistent with this is the great gift of the Creator to mankind — the conscience. This is the true source of our accountability, for it warns us before we do wrong. It is God’s mercy to us that our conscience has the added power to condemn us if we go past that warning. That guilt is meant to soften the heart we had to harden in order to do what we knew was wrong. To continue to go against the voice of our conscience in spite of the increasing weight of guilt is to incur eternal judgement.

What exactly is this voice saying? What is this instinctive knowledge that God has inscribed on every human heart? It is the terms of an Everlasting Covenant that God made with Adam and Eve after the Fall, the boundaries of the conscience that would keep them and their offspring from the sins that would take them to the second death:

To the woman He said, “I will greatly multiply your pain in childbirth; in pain you shall bring forth children; yet your desire shall be for your husband, and he shall rule over you.”

Then to Adam He said, “Because you have listened to the voice of your wife, and have eaten from the tree about which I commanded you, saying, ‘You shall not eat from it,’ cursed is the ground for your sake. In toil you shall eat of it all the days of your life. Both thorns and thistles it shall grow for you, and you shall eat the plants of the field. By the sweat of your brow you shall eat bread, till you return to the ground, because from it you were taken; for you are dust, and to dust you shall return.”

These verses convey the essence of God’s absolute moral standard for men and women. The woman is to desire her husband and give herself to bearing his children, not trying to escape the suffering of childbirth or the responsibility of caring for them. This creates a strong bond between the woman and her children, who grow up respecting her. Her husband’s love and respect for her also increases as he watches her go through the pain of childbirth.

The woman is to willingly submit to her husband’s authority over her. The man is to lovingly rule over his wife, appreciating her desire for him and being faithful to her. He is to work hard to provide for his family, living off the sweat of his own brow, not trying to escape the suffering or the responsibility of being their provider. And they love and respect him for this.

Have you ever seen a Rainbow? 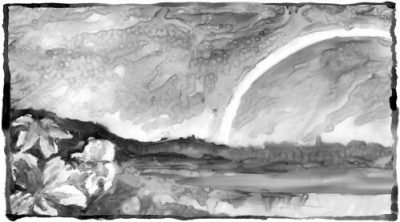 Every now and then we get an awesome treat. After a mid-day thunder shower when the elements are just right, up in the sky, something special appears. As the sunlight cuts through the clouds an almost surreal image appears —
a multi-colored bow arched up over the earth, hinting of an unseen spiritual realm. Have you ever seen a rainbow?
Have you ever wondered what the significance of the rainbow is? It was established as a sign of God’s love toward all living things on the earth.1Genesis 9:16-17 The earth and its entire population had been destroyed by a flood because of their great wickedness. Their thoughts were set on evil continually and the earth was filled with violence.2Genesis 6:5-12 Only a handful of people did not give into the tremendous societal pressure to do evil, but remained faithful to the instinctive knowledge of good and evil that was in their conscience.3Genesis 3:22
After the flood, God commanded them to be fruitful and multiply and fill the earth with righteousness.4Genesis 9:1 He also made a covenant with them and all the human race to follow. Obeying this covenant would insure a healthy society, abandoning it would pollute the earth again.
The sacredness of human life was established, murder condemned, and capital punishment given to the governments to carry out.5Genesis 9:5-6
The rainbow was placed in the sky as a sign of this everlasting covenant that God was making with mankind. It would be there for all future generations to look at and remember the destruction that would come about through breaking that covenant.6Isaiah 24:5-6
Today it is just like it was in the days of Noah.7Matthew 24:37-39 Men and women are eating, drinking, and enjoying an unprecedented boom in the economy. People everywhere are coming under the societal pressure of the day to abandon morality and conscience for a life of ease and pleasure. Traditional values are being replaced by a new “morality” — murderers are allowed to live, the covenant of marriage is endangered, and sexual immorality is endorsed and applauded. But what about this sign of the rainbow?
The earth is becoming polluted by it’s inhabitants because
they are breaking the everlasting covenant.8Numbers 35:33 This is doing more to destroy the planet than anything else. The warning signs for the end of our society are present all around us. Will anyone acknowledge them?
As in the days of Noah, the God of Creation is preparing
a ship that will carry all those on board into a new age where righteousness dwells. This time it is not a literal boat but a nation of people who have surrendered everything to see the purpose of their Creator accomplished on the earth. This nation is made up of ordinary people who have been forgiven for the ways that they once suppressed their conscience. Now they are learning how to love one another.
The rainbow stands as an everlasting reminder of the Creator’s kind intentions toward mankind. It also tells of the looming judgement that will come to everyone who practices evil. To this day, men and women everywhere have the privilege of looking up into the sky after the rain to see that spectacular sign. Next time the sun shines through the clouds and casts the colored arch over the earth, consider the true message of the rainbow…


Tragically, beginning with Cain, there were many that forsook this covenant. By the time of Noah’s generation, wickedness was so great that God was grieved that He had made man (Genesis 6:5-8). But He took hope in Noah’s family, who still held to the Everlasting Covenant. After the great flood He added to it:

This includes a provision for human government to punish those who destroy human lives, which Israel received as law (as all nations will in which righteous men prevail):

All good people will uphold this standard (even with their vote), for they value the image of God in their fellow man. Not only will they not murder (or withhold justice from murderers), but they will not knowingly do anything to ruin another person’s life. Still, as in the days of Noah, most people today do not uphold this Everlasting Covenant, and the tragic results are plain to see, as the prophet Isaiah foretold:

The earth is polluted by its inhabitants, for they transgressed laws, violated statutes, broke the Everlasting Covenant. Therefore, a curse devours the earth.